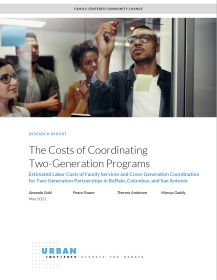 Urban Institute: The Costs of Coordinating Two-Generation Programs May 2021

From the Urban Institute:

Across the United States, interest has grown in two-generation approaches as a strategy for lifting families out of poverty. These approaches vary in the combination of services they offer and their target population, but they all share a common goal of supporting low-income children and their parents simultaneously so entire families can progress together (Aspen Ascend 2014). Despite the growing prominence of two-generation approaches, less is known about their cost and the size of the investment needed to make them successful. Only one published study has estimated the full cost of operating two-generation programs (James Bell Associates 2018). Yet, no study to date has isolated the specific costs associated with bringing together existing single-generation services (i.e., those for parents only and those for children only), building two-generation services, and coordinating interventions for families within a two-generation framework.

This study may be useful for multiple audiences. By providing three case studies of the staff labor costs of two-generation service coordination, this research may help other localities and nonprofit service providers in budget planning and resource allocation when organizing their own two-generation efforts. Funders and policymakers, including representatives of state and local governments, interested in supporting similar collaborative work may benefit from understanding the personnel investment necessary to support cross-organizational partnerships and coordinated service delivery. Researchers may also benefit from the findings, which could benchmark future two-generation cost studies.